4 Caligo atreus butterflies in a glass vitrine, from Colombia.

Caligo atreus, the yellow-edged giant owl, is a butterfly of the family Nymphalidae. The species can be found from Mexico to Peru.

The wingspan is 140–160 mm. The larvae feed on Musa and Heliconia species and can be a pest for banana cultivation.

Adults feed on juices of rotting fruit. Adults are known for their relatively long lifespan compared to other butterflies. Up to 3-4+ months.

Adults are slow and often are attacked by birds. They defend from bird attacks closing the wings and looking like a Owl.

The combination of colors and the arrangement of the butterflies make this piece a unique example of simplicity and beauty.

A handmade masterpiece by One of a Kind.

These are extremely beautiful specimen, specially the Siproeta steneles that has amazing colour and pattern in both sides of the wings. 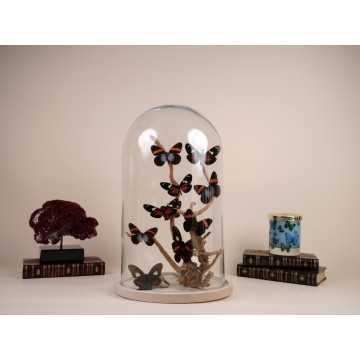 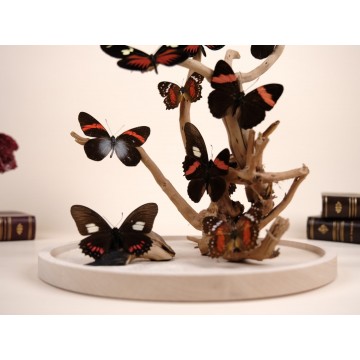 Beautifully mounted in a Red Moor wood piece, previously treated and harmless, for the security and prevention of any bacterial problem.

A true One of a Kind piece.

Palla decius and Hypolimnias dexithea in a golden base glass dome.

Both belonging to the Nymphalidae family.

Superb examples of how beautiful butterflies can be. 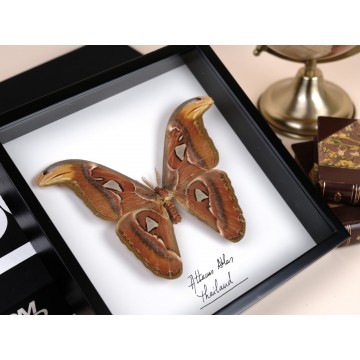 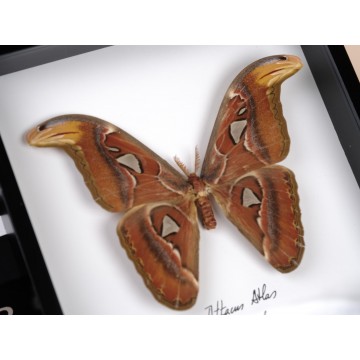 Attacus atlas, the Atlas moth, is a large saturniidae moth endemic to the forests of Asia. One of the largest lepidopterans, with a wingspan measuring up to 24 cm (9.4 in).

This beautiful species came from Thailand.

Urania leilus named as Green-banded Urania is a daytime neotropical moth of the Uraniidae family, found east of the Andes.

These specimen is from Peru. 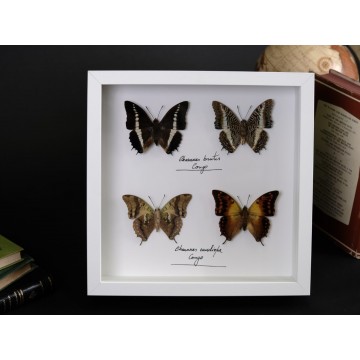 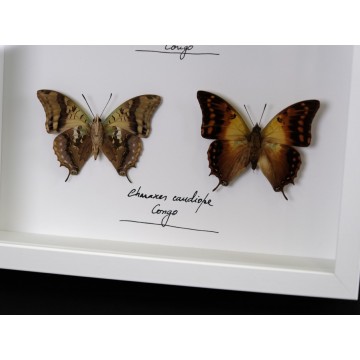 A beautiful glass frame with 3 speciemen of each of Charaxes brutus and C. candiope showing both sides of the wings.

Charaxes brutus, the White-barred Emperor or White-barred Charaxes, both butterfly in the family Nymphalidae.

Charaxes candiope, the Green-veined Emperor or Green-veined charaxes are very territorial and according to the Guinness World Records is the most aggressive butterfly in existence.

Charaxes with closed wings usually have incredible patterns and colours. 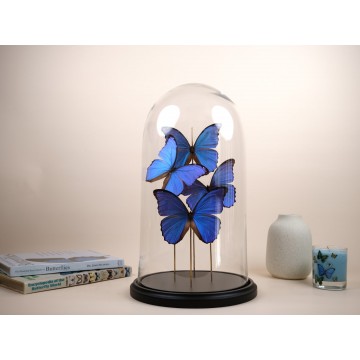 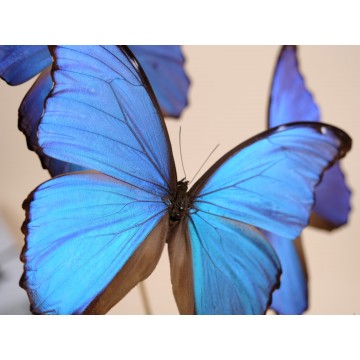 Glass dome with four Morpho didius butterflies from Peru, one of the most iconic butterfly.

With the intense metallic blue color, the giant blue Morpho, is a Neotropical butterfly belonging to the subfamily Morphinae of family Nymphalidae.

One of a kind piece! 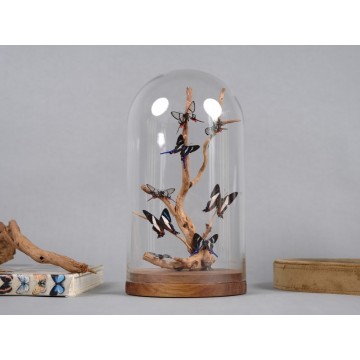 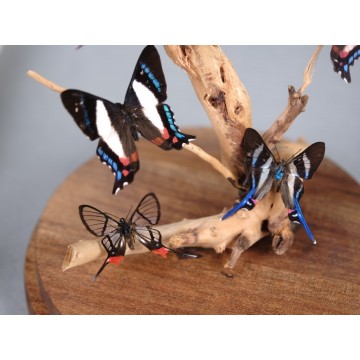 Handmade glass dome in a Redmoor wood brach, displaying four Chorinea faunus, from Bolivia know as Long-tailed glass wing because of is transparent wings, two Rhetus arcius, from Perú is an exceptional beautiful little butterfly and two Ancyluris formosissima, from Perú considered as well one of the most beautiful butterfly.

One of a Kind decor piece!

Pharmacophagus antenor, the giant swallowtail, is a butterfly from the family Papilionidae.

As the common name implies, it is large (12 to 14cm wingspan) and endemic to Madagascar.

It is the only species in the afro-tropical genus Pharmacophagus.

Glass dome with specimen of great beauty, for your home decoration!

Handmade glass dome with a black lacquered base containing:

A beautiful and colorful glass dome with magnificent butterflies, great exemplars of their species.

The Urania is known as the Sunset moth and it is among the most beautiful butterflies in the world!

Vivid and bright reflects of color, turns into an amazing decor piece!

The blue, red and white colours together with its beautiful shape make one of the most sought after species for collectors.

Mounted in a Red Moor wood piece, previously treated and harmless, for the security and prevention of any bacterial problem.

Cymothoe sangaris, the blood-red glider, is a species of butterfly from the Nymphalidae family found in Central Africa. 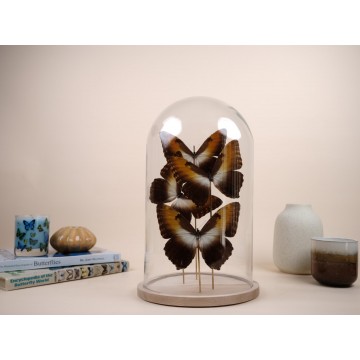 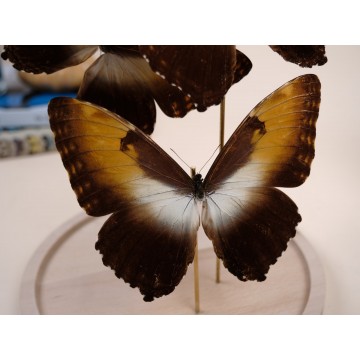 It's the biggest of the genus, reaching 20cm.

Morpho hecuba, the Sunset butterfly, is a Neotropical butterfly belonging to the subfamily Morphinae from Nymphalidae family. 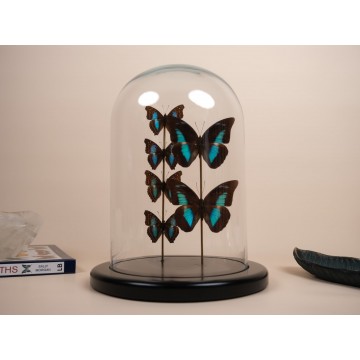 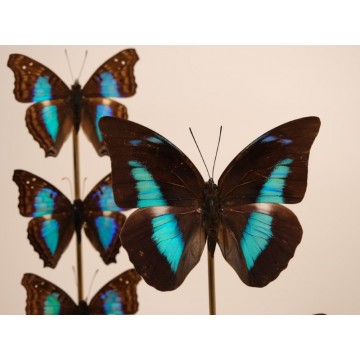 These two species belong to the Nymphalidae family, the metalic blue mixed with the black make them a unique decor piece.

Glass vitrine with black lacquered wood base with the most elusive Morpho cisseis.

The Cisseis Morpho, is a large butterfly with a wingspan of 147 mm and 180 mm. The upperside is blue-green gray, the outer edge is largely bordered by black and broad black band extending over two-thirds of the forewing's costal edge. The reverse is copper decorated with a line of white chevrons and black, yellow and white eyespots, three on the forewings and a very large and three more small eyespots on the hindwings. This one from Perú.

A Morpho peleides, Peleides Blue Morpho, they drinks the juices from rotting fruits for food. Its favorites in captivity are mango, kiwi, and lychee. Morpho peleides butterflies live in the rainforests of South America, and can be found in Mexico and Central America, this one from Colombia.

And a Morpho aega, Aega Morpho is the most common of all Morpho butterflies, but is electric blue color is fantastic. This one from Brazil.