Five specimen of Pirops candelaria displayed in a glass vitrine, from Thailand.

This beautiful and very peculiar species are not a butterfly, they belong to the Cicada group - its long proboscis make it unforgetable, and they use it to feed from the plant sap: including longan and lychee trees (Sapindaceae), among others.

Its long, slender proboscis is used to pierce tree bark to reach the phloem.

One of a kind handmade piece! 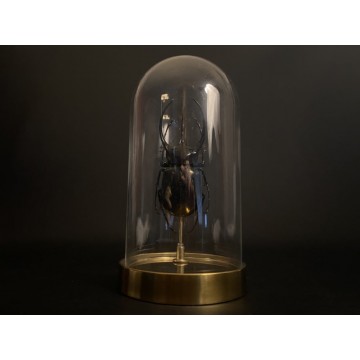 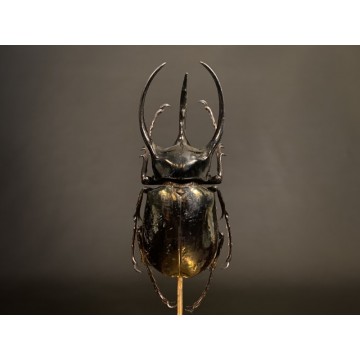 Chalcosoma caucasus (Caucasus beetle) is a species of beetle in the family Scarabaeidae.

This one came from Sumatra, displayed in a glass dome.

Acrocinus longimanus, Harlequin beetle, is an insect of the order Coleoptera and the Cerambycidae family.

A beetle whose habitat is the tropical forests of the neotropical region, from southern Mexico to Brazil and northern Argentina, including the Caribbean islands of Trinidad and Tobago.

Displayed in a black wood frame, from Satipo - Perú. 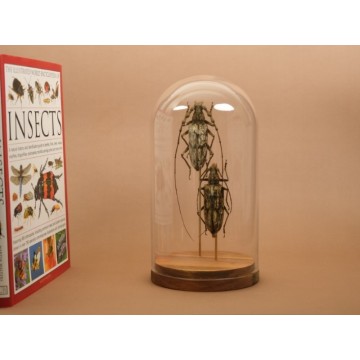 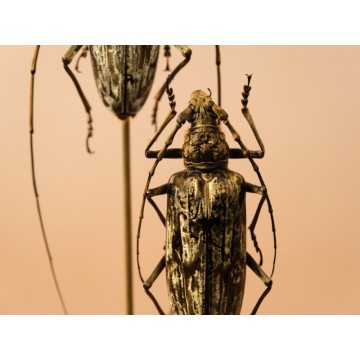 A great pair of Neocerambyx gigas (Thomson, 1878), male and female, from Thailand.

From Cerambycidae family, these uncommon species are very much appreciated by collectors.

Gold and silver reflections and the very long antlers in the male.

Perfect exemplars of this specimen, in a wood base glass dome. 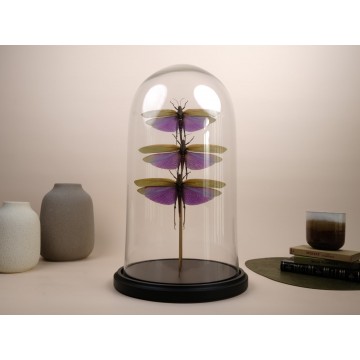 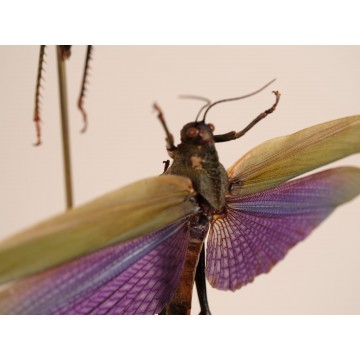 Titanacris albipes is a species of grasshopper in the family Romaleidae, they can jump big distance and are one of the biggest grasshoppers species, their violet wings make them a beautiful species.

From French Guiana, a one of a kind glass dome. 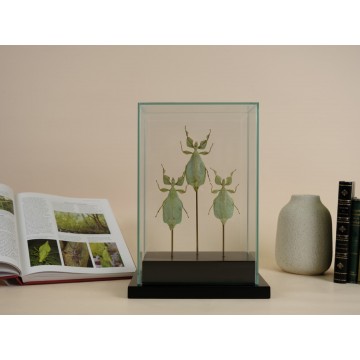 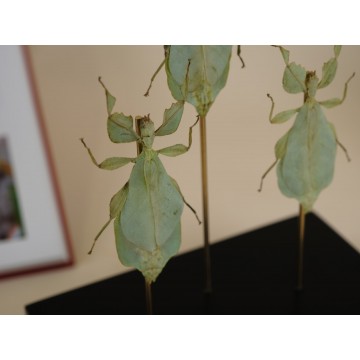 Phylliidae comprise the true leaf insects. While most phasmatodeans exhibit an elongated and slender body form to camouflage perfectly in the foliage, among branches or on bark, leaf insects mastered the imitation of angiosperm leaves. These one's came from a breeding farm in Thailand. 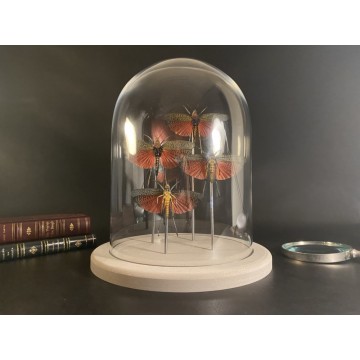 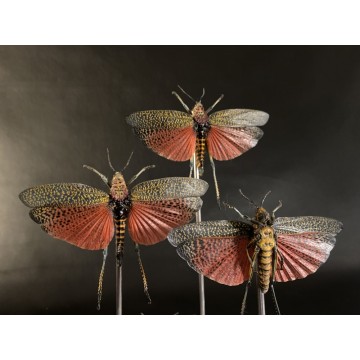 It is a toxic insect due to eat a poisonous plant.

This is one of the most beautiful insect, endemic from Madagascar.

A superb glass dome with 7 Cicadas from Thailand, one Pomponia intermedia and two of each Salvazana imperialis, Tosena splendida and Ayuthia spectabile.

Amazing exclusive specimen in a beautiful squared glass box with black lacquered wooden base, displayed to enjoy their colors and natural textures.

This one is a giant measuring with the wingspan more than 22 cm. 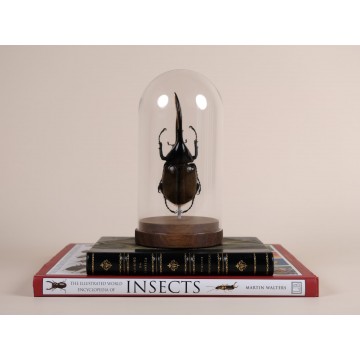 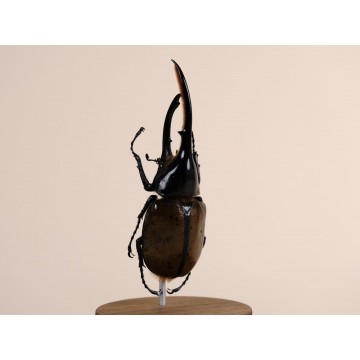 A huge Dynastes hercules, the Hercules beetle in a glass dome.

Dynastes hercules is known for its tremendous strength and is named after Hercules: a hero of classical mythology who is famed for his great strength.

Dynastes hercules is a species of rhinoceros beetle native to the rainforests of Central America, South America, and the Lesser Antilles. It is the longest extant species of beetle in the world, and is also one of the largest flying insects.

This is a giant one with over 130mm and came from the rainforest of Colombia. 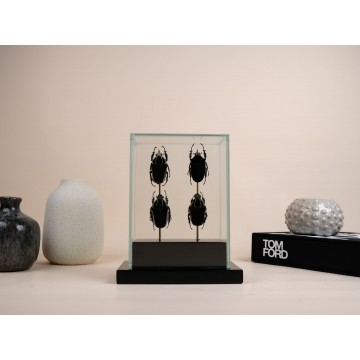 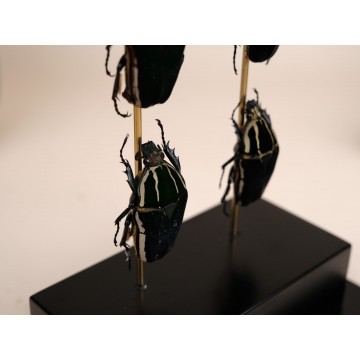 A beautiful glass vitrine with a male and female of Mecynorhina torquata, is among the largest flower beetles in the world, only surpassed by the goliath beetles.It reaches about 55–85 millimetres (2.2–3.3 in) of length in the males, while the females are slightly smaller, reaching about 50–60 millimetres (2.0–2.4 in) of length.

Also a male and female of Mecynorhina ugandensis that differs from the torquata in the colour more brown and slightly bigger. These beetles are native to tropical Africa, especially in the Democratic Republic of the Congo, Cameroon and Uganda. In this case they came from Uganda.

Fantastic beetle, in the group of the biggest Coleoptera, from Congo.

A big size species in a metal glass dome.

Before this specimen was very difficult to get, nowadays they are usually kept in captive breedings.

Native to a small island near Sulawesi Island, Indonesia.

Goliathus orientalis in a glass dome.

Goliathus supports a complex and variable pattern of white spots surrounded by a black border.

They live only in sandy areas with thick trees.

Our specimens come from a breeding in the Democratic Republic of the Congo. 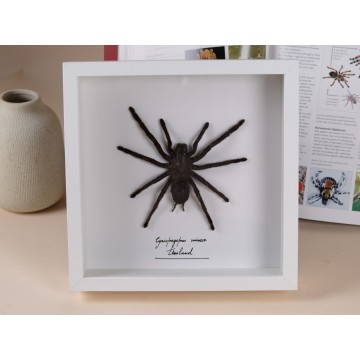 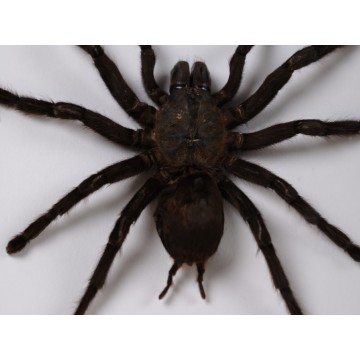 It is a very fast and aggressive spider, and females are bigger and more dangerous! Even during mating, males are too afraid to simply approach a female and mate with her. Males take it pretty slow, attempting to distract the female with large slapping action from their front pair of legs.

They live in Thailand and Myanmar. 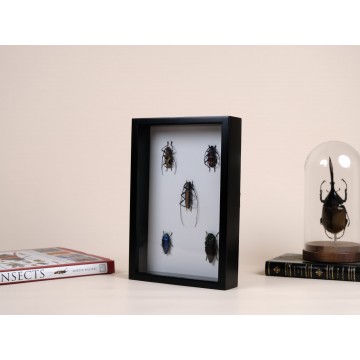 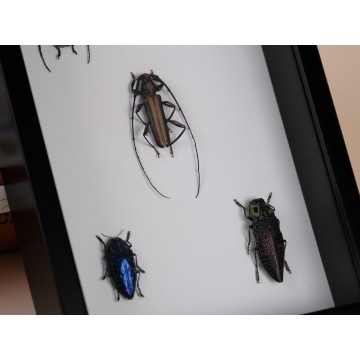 A beautiful group of Coleoptera framed in a lacquered black wood frame.

A One of Kind piece of uncommom insects in very high quality specimen.